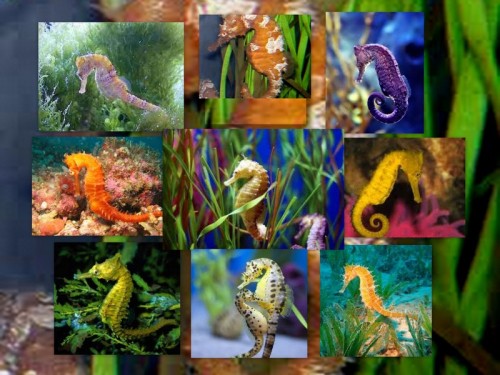 Animal World – Sea Horses | Storyteller Media ~ Published on Jan 23, 2012 ~ The mystical sea horse. Very graceful, very beautiful, very endangered and very strange. It’s the male who gives birth with this species. We join the team at the London Aquarium to see what they are doing to help save them from extinction.

The destruction of coral reefs, trawling and the use of seahorses in Chinese medicine is leading to their decline. How do we stop this near-mythical sea creature from becoming extinct? – Uploaded on Jun 23, 2010 to YouTube.

http://www.thedeep.co.uk Filmed at The Deep, Hull, Yorkshire, United Kingdom  The world’s only submarium is home to over 3500 fish, including sharks and rays… There are many illegally imported seahorses. When they are discovered by Customs and Excise, London Zoo aquarium at ZSL help out by housing and taking care of them … We were able to help out by taking this mature breeding pair. Many seahorses are on the IUCN Red list classified as VULNERABLE and have shown population declines of 20% over the last 10 years. Many species haven’t enough information about them to be able to manage their exploitation.