WHAT IS FRACKING?
Hydraulic fracturing, or fracking, is a method of forcing natural gas or oil from rock layer deep below the earth’s surface. 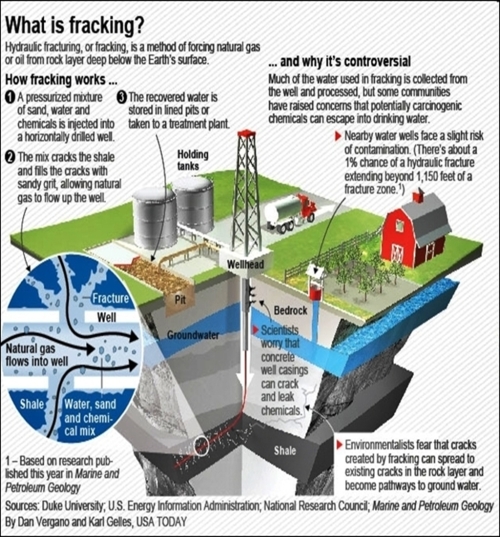 HOW FRACKING WORKS:
1) A pressurized mixture of sand, water and chemicals is injected into a horizontally drilled well.
2) The mix cracks the shale and fills the cracks with sandy grit allowing natural gas to flow up the well.
3) The recovered water is stored in lined pits or taken to a treatment plant.

“Animation of Hydraulic Fracturing (fracking)”, a YouTube video was published on Apr 26, 2012 ~ 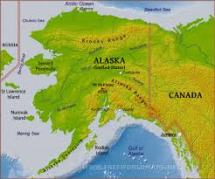 Alaska is a major component in fracking and it is big in the future. Alaska has around 2 billion barrels of oil and 80 trillion cubic feet of gas. This is enough to fill the Alaska pipeline for 12 decades. The wells of Alaska are located in two areas. The biggest spot for the fracking to occur is the North Slope, where most of the wells are… The other area of fracking takes place in the Kenai Peninsula on the South coast of Alaska… Not only can gas and oil be extracted from fracking, but so can 500 million barrels of recoverable natural gas. This recoverable natural gas comes from the North area. Alaska fracking is a good way to extract oil because it can cover many wells at one time, making the process less expensive… because the fracking takes place in the north part of Alaska, there is no human harm done because it does not take place in developed areas, where many people normally live. Fracking in Alaska takes place in the undeveloped areas.

FRACKING  IS CONTROVERSIAL AND HARMFUL:

Around 25% of the oil extraction in Alaska uses fracking… Alaska fracking can be harmful to the environment as well as the animals because it puts chemicals in water that harms these two. This is why Alaska fracking has been a controversial topic for many years. Because of this, there have been hearings for new laws and regulations for this type of oil extraction in Alaska.

These types of laws and regulations, if passed, would be very strict. Some of the regulations could involve oil extraction companies giving more information about the chemicals used that could potentially harm any areas containing water. The contamination of water can cause a lot of problems in the future for Alaska.

A MUST SEE ~ The following YouTube video, “Fracking Hell: The Untold Story”, uploaded on Jan 11, 2011 by LinkTV.