IS YOUR ATTITUDE CONTAGIOUS? ~ INSPIRATIONAL!!!

“ATTITUDES ARE CONTAGIOUS.
IS YOURS WORTH CATCHING?”

YouTube video, “Attitude is Everything” by Vicki Hitzges, uploaded on March 22, 2011.  Music “Free As a Bird” by Omar.

“Attitude is a little thing that makes a BIG difference.”
Three of my favorite quotes from this video are ~

KEEP AN ATTITUDE OF GRATITUDE ~ “Feeling gratitude and not expressing it is like wrapping a present and not giving it.” William Arthur Ward

JOY BOOMERANGS ~ “If you want to lift yourself up, lift up someone else.” Booker T. Washington

SURROUND YOURSELF WITH POSITIVE PEOPLE  ~ “To love and be loved is to feel the sun from both sides.” David Viscott

This fantastic book is available from Simple Truths ~ click here to learn more about the book: http://bit.ly/dLbqOS

Do you think your attitude is making a difference in your life and the lives around you???

Let us all count our blessings ~
and jot them down.

Rainsoft Ottawa sends best wishes for a joyous Easter celebration to all our WordPress friends/followers/bloggers.

“KING OF THE RABBITS”

In March 2011, a team of palaeontologists reported the discovery of a new species of extinct rabbit on Minorca, which is a small Spanish island in the Balearic archipelago in the western Mediterranean Sea. The researchers, led by Joseph Quintanaa from the Institut Català de Paleontologia in Barcelona, named it Nuralagus rex, literally ‘King of the Rabbits’. 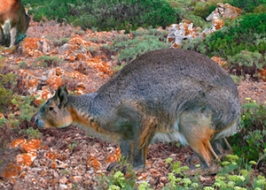 This royal rabbit hailed from the Late Neogene period, which ended about 2.5 million years ago, and would have weighed around 12kg. This is about six times the size of the modern European rabbit, Oryctolagus cuniculus.

Its skeletal structure indicates that it was not built to hop like modern-day rabbits, and did not have the heightened sense of smell and excellent vision of its modern-day counterparts.

In the 40 million years of rabbit evolution, most species have remained within the size range found in modern rabbits. The giant rabbit of Minorca is a notable exception. Its enormous size (for a rabbit) may have been due to a lack of predators on the island. This would be a classic example of a principle in evolutionary biology called the “island rule,” which states that animals confined to an island can evolve to get bigger due to an absence of predators, or smaller because of a scarcity of food. Contemporaries of Nuralagus rex, also found in the Minorca fossil record, include a bat, a large dormouse, and a giant tortoise…

Nuralagus rex, a giant rabbit that lived between 3 and 5 million years ago, is the oldest known example of the “island rule.” Its unique physiology presents scientists with interesting insights into the evolution and adaptation of mammals in an isolated environment free of predators. Quintana hopes that his giant rabbit will become a mascot of sorts to attract students and visitors to Minorca, an island that’s a popular tourist destination in Europe. There’s no other place that can lay claim to being the home of the largest rabbit that ever existed on the planet.