CHRISTMAS/NEW YEARS QUIZ ~ HAVE FUN WITH THIS!

~ SCROLL DOWN FOR ANSWERS ~

2)  How many people in the world know the carol “Silent Night”?
10 million
1 billion
3 billion

3)  What is the ninth candle in the Hanukkah Menorah for?
It lights the other candles
It’s blown out first
It’s a candle for children

4)  Who flies through the air and fills children’s stockings with candy and presents?
Santa Claus
La Befana

7)  Why do Southerners eat black-eyed peas and greens on New Years’ Day?
To honor farmer forefathers
To cure a hangover

11)  Pointsettias get their name from?
Their lovely, pointed leaves
The Spanish word for flower
A U.S. minister to Mexico

13)  What do children leave outside the door in Germany on Nikolaustag on December 6th?
toque
mitten
boot

14)  In areas of France what burns in homes from Christmas Eve to New Year’s Day?
incense
simmering fruit
a log

~ Here are your answers ~

1)  Thomas Edison – he not only invented the electric light bulb, He also created the first strand of electric lights. He hung them outside his New Jersey lab during Christmas season in 1880. Lights for Christmas trees weren’t sold to the public until 1917.

2)  3 billion – Of the roughly 7 billion people on Earth about 3 billion are familiar with “Silent Night.” The carol was first heard on Christmas Eve 1818, in Oberndorf, Austria, and was written by Joseph Mohr and Franz Gruber. It has been translated into more than 300 languages

3)  It lights the other candles – The ninth candle is the “shamash,” which is used to light the other candles. Hanukkah is an eight-day Jewish holiday marking the defeat of an army that had invaded Israel. After the victory, the Jews celebrated at the Holy Temple in Jerusalem. They found enough oil to light the lamp for only one day. But the oil lasted eight days and nights, and it’s celebrated as a miracle.

4)  Both – American children know Santa, but Italian children wait for La Befana, the good witch who rides a broomstick the night of

January 5th. The children wake up on January 6th – the Feast of the Epiphany – to find toys, candy, and fruit that she left. Some families in Hispanic communities in the U.S. practice traditions brought from Latin  American countries. Children place hay and water under their beds the night of January 5, for the camels of the Three Kings, and wake up to find presents.

5)  Christmas crackers (pretty paper tubes that you pull apart) – are a British tradition. The tubes pop open with a bang when pulled. Inside, there’s a small gift like a mirror and a joke written on a piece of paper. There’s also a paper crown, a nod to the Lord of Misrule, an old custom that put a peasant in charge of village Christmas events. Brits wear the crown and read the joke out loud.

6)  long, long ago – This well-known New Year’s Eve tune is from a poem by Robert Burns, based on a Scottish folk song. “Should old acquaintance be forgot, and never brought to mind? Should old acquaintance be forgot, and auld lang syne.” It’s a tribute to days gone by.  The words are in the Scots language, which today is spoken in the Lowlands and Northern Isles of Scotland.

7)  To bring wealth in the New Year – The black-eyed peas stand for coins. The greens or collards stand for paper money. Eating these dishes is supposed to bring good luck and wealth in the coming year.  Cultures around the world celebrate the New Year with foods meant to bring prosperity: fish in China, lentils in Italy, and gold-colored food in Peru. (The tint often comes from the spice turmeric.)

8)  St. Francis of Assisi – widely known today for his love of animals — created the first live nativity scene, in 1223 in the Italian village of Greccio. He recreated the scene of Christ’s birth with people playing Mary and Joseph and animals from the village as the creatures in the stable.

9)  11,875 – It’s also covered with 2,688 Waterford crystal triangles. Americans began dropping a giant ball at New Year’s Eve in 1907. The first was a 700-pound iron-and-wood beauty lowered from a flagpole atop One Times Square.

11)  U.S. minister to Mexico – The poinsettia is native to Mexico, where it’s used to decorate churches at Christmas. It gets its name from American diplomat Joel Poinsett, who introduced the flower to the U.S. in the 1800s. The red and white parts of the poinsettia — which some people think are petals — are actually colored leaves called bracts.

12)  Swimming!  There are some intrepid people who get out in the open air and away from all the excess on Christmas morning, though it can be fairly miserable out there at that time of year.  One long standing tradition in Sandycove, a suburb of South Dublin is the Christmas Day Swim – in the sea. Yes, in Ireland, in December, they swim in the freezing Irish sea – and let me tell you it is MUCH colder even that it looks in the picture! Crazy, but they say it’s fun! 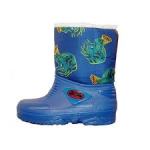 13)  On December 6 is Nikolaustag, St. Claus day. A shoe or boot is left outside the door on Dec.5 with hopes the following morning you find presents, if you were good – or, unfortunately a rod if you had been bad.

14)  In southern France, it is a tradition among some families to burn a log in their homes from Christmas Eve until New Year’s Day. In olden days, farmers would use a part of this log to make the wedge for the plough as good luck for the next harvest. In Lyon, December 8th is annually celebrated as the Festival of Lights or ‘fete des lumieres’ in honour of Mother Mary for all the blessings through the year. Other important French traditions include the Nativity Scene, the midnight feast called ‘le reveillon’ and Pere Noel.

15)  Norwegian legend has it that when Christmas Eve arrives it brings with it a series of evil spirits and witches.  The evil spirits and witches could not just walk from place to place but needed a form of transportation to fly around and they often used brooms for this.  It is Christmas tradition for Norwegian families to hide all brooms, mops and brushes on Christmas Eve so that these trouble makers can not use them.