~ ENJOY THIS SUPER VIDEO AND MUSIC ~

1)  The project is to last for twelve weeks during Summer 2013, and
2)   That the art work will be created off-site – artists participating in TWTP will donate original works of art, which will then be scanned and printed on vinyl material that will be installed on carefully selected tanks. These artist designed tanks will spark a global dialogue about the future of one of our most precious and endangered resources: WATER.

Here’s the latest artistic addition to the Manhattan skyline – with thanks to Architizer.com blog, June 5, 2012: http://www.architizer.com/en_us/blog/dyn/42914/reclaiming-the-water-tower-as-public-art/

…”The latest in the trend is artist Tom Fruin‘s imaginatively transparent and colorful “Watertower” project, which he recently installed on a DUMBO rooftop. The piece, which opens this Thursday, June 7, maintains the proportions and size of a typical water tank, but has been rendered a glass tapestry of salvaged materials. Visible from Lower Manhattan, the sculpture is a De-Stijlesque jigsaw of upwards 1,000 polychromatic fragments of discarded and recycled Plexiglas Fruin collected from building sites all over the city. During the day, the sun sets the water tower ablaze, while at night, projection designer Jeff Sugg will illuminate the structure with a light show boogie woogie planned to play every nightfall throughout the year”

PLEASE SPREAD THE WORD ~ this is a mammoth and most worthwhile undertaking of Mary Jordan and Word Above the Street to raise global awareness about the future of one of our most precious and endangered resources: WATER. 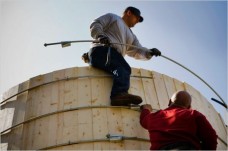 As you will see in the videos, two companies in New York build water towers, both of which are family businesses in operation since the 1800s. Even though there are steel constructed tanks, wooden ones are preferred because they can be easily assembled and transported to rooftops in parts and cost less.

“They’re a signature part of the city skyline, and even in the 21st century, wood water tanks still have a unique and necessary job here, providing water to millions of homes.” – NY1’s Jeanine Ramirez

The New York Times staff photographer Richard Perry took some great photos of Rosenwach putting up water tanks, which was part of his project photographing different products and companies still manufacturing in NYC.

You can also watch a rooftop water getting a facelift:

Water tanks / water towers are a rooftop fixture of the New York City skyline and are the subject of fascination for many. But sometimes they need a facelift to repair the damage of the elements. This video shows one of these Manhattan fixtures getting a tune-up. Filmed in the late fall of 2011, it’s sped up 2.5X.

Safety falls a little lower on the priority scale when Discovery channel’s, Mike Rowe, assists a team of carpenters on top of a New York skyscraper.

In a thoughtful look back at his most challenging and hazardous apprenticeships, Mike makes a practical case for safety and reaffirms the critical role of individual responsibility in a dangerous world.

See you back here tomorrow for Part 3:

Word Above The Street organization’s