Episode 6 Ocean Requiem, uploaded on Jun 30, 2009.  This is a rather slow moving video but the end is very touching. This is a good relaxing video with a message so enjoy and visit seashephard.org to see how you can help.

Promo image Lindsay Robinson/University of Georgia
As Maggie recently wrote about, there’s a lot of plastic crap in Earth’s oceans; The latest estimate was that there are over 5 trillion pieces of plastic floating in our seas, weighing over 250,000 tons. That’s about 700 pieces of plastic for every human on earth. 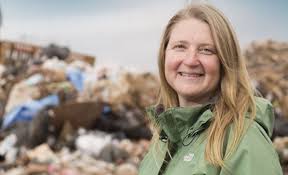 But a new study paints an even more alarming picture of the situation. Jenna Jambeck and her colleagues at the University of Georgia found that an incredibly large amount of plastic waste is mismanaged by the populations living in coastal area, and that even a conservative estimate of how much ends up in the sea puts adds up to between 4.8 million to 12.7 million metric tons of plastic. Per year. (8 million is the mid-point of the estimate).

Part of the problem is that some of the countries with the largest coastal populations – mostly in Asia – are also developing nations with inadequate infrastructure to deal with all the waste that they generate.

Here one of the authors of the study explains the methodology behind the numbers and also gives a warning about the future if we don’t clean up our act on waste management: 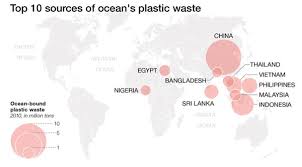 Our methods for this estimate were to look at per person waste generation rates in 2010 from 192 countries with a coastline in the world. Because people’s activities nearest the coast are responsible for most of the plastic going into the water, we limited our analysis to a 50km strip of the coastline. From there, we looked at what percent of that waste is plastic, and what percentage of THAT is mismanaged waste (which means litter or when waste is not captured and dumped on the land). From there we had three scenarios of input into the ocean: low, mid and high. Our 8 million metric ton estimate is that mid-range scenario. 8 million metric tons of plastic is equal to 5 bags filled with plastic going into the ocean along every foot of coastline in the world. That… is HUGE.

And it can get worse. If we assume a business as usual projection with growing populations, increasing plastic consumption and increased waste generation, by 2025, this number doubles – we may be adding 17.5 million metric tons of plastic per year. If that happens, then our cumulative input over time from 2010 to 2025 is projected to be 155 million metric tons.

The solutions to this plastic pollution problem are known, we just need to actually do it. We need to cut back on plastic production in the first place, so there’s less of it in the system. Then whatever is left needs to all be captured and managed properly.

This requires not only better infrastructure (especially in poorer areas of the world), but also social and cultural changes. People need to be educated on what needs to be done with their trash in general, and plastic specifically.